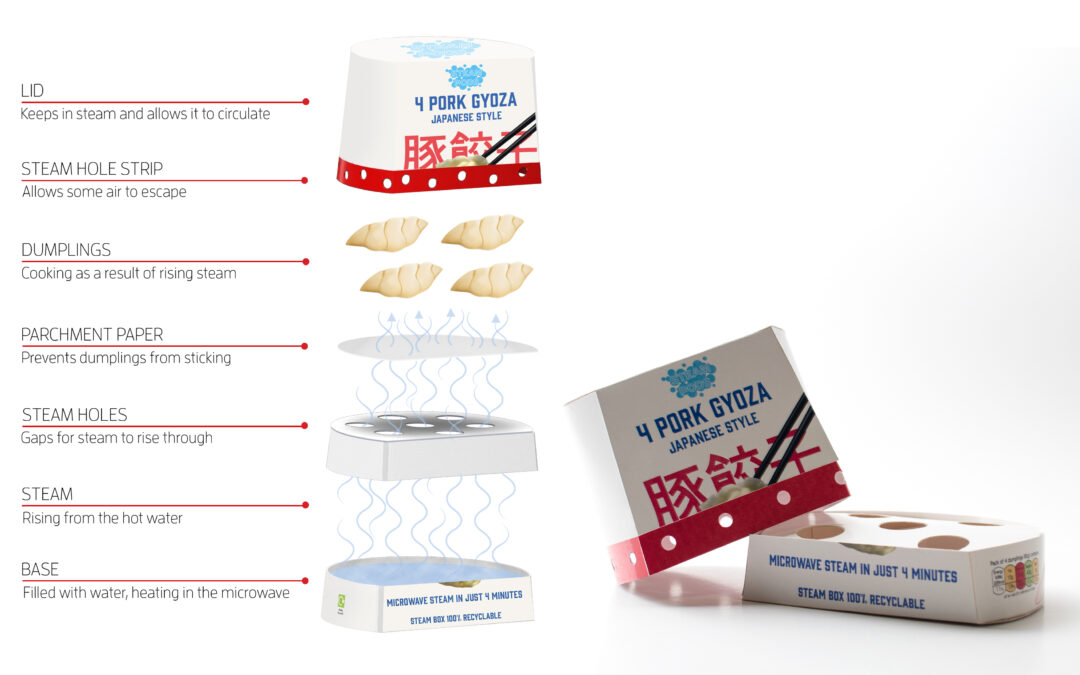 I’ll be honest; there are some foods that I love but I’m frankly too lazy to make them at home. Asian dumplings steamed to perfection are somewhere at the top of that list—until now! Cheers to Britain’s own Holly Grounds, who won the Save Food Gold Trophy for her unique Steam Pods packaging design in the WorldStar Packaging Awards hosted by the World Packaging Organization.

Steam Pods is a new take on microwavable meals and is made using a steam box that is 100% recyclable with a partial PET-film lining. Steam from the hot water in the bottom compartment cooks the dumplings directly above in a method that is as innovative as it is healthy. Every aspect has been considered- the steam hole strip allows some air above the dumplings to safely escape while the parchment paper underneath prevents them from sticking. The lid on top traps the steam and allows it to circulate, and four hot, delicious dumplings are ready to devour in only four minutes. Traditionalists may still prefer the bamboo steamer, but as someone who won’t make anything that takes longer than five minutes to prepare, these Steam Pods are a game changer.

The Save Food category of the competition honors designs that reduce food waste. The WPO originally intended to announce the 2019 winners at the Interpak convention in Germany this past spring, but due to international lockdowns, the online award ceremony took place in August. I sincerely hope that there are no delays in getting this convenient dumpling meal on my nearest grocery store shelf. Pass me the soy sauce!