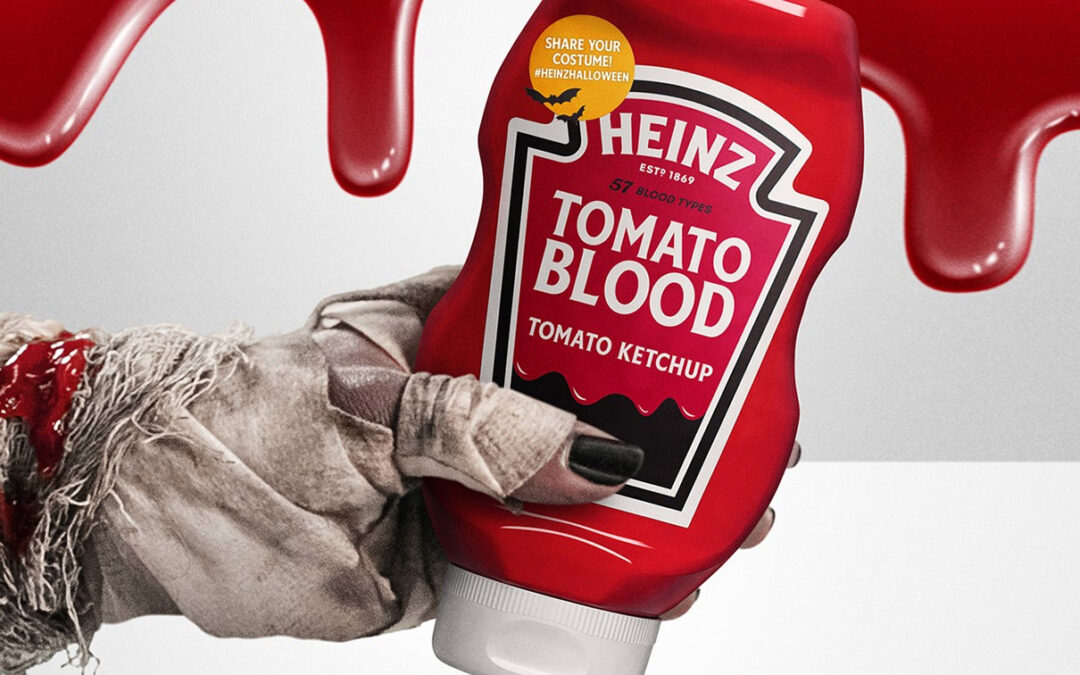 Are there any other Halloween-lovers who hate blood and guts? I am not a fan of gore, but I absolutely love the costumes, the macabre décor, and autumnal whimsy that comes along with Halloween season. It is my favorite season- perhaps over Christmas! Whenever I’ve seen blood in a movie, I always cover my eyes… When I was a child, cowering behind my hands in the movie theatre, my mother would whisper, “It’s ok, sweetie- it’s just ketchup!” I’ve been thinking of fake blood as ketchup my entire life- and now America’s favorite ketchup company Heinz is embracing and rebranding on that concept.

In a hilarious PR move, Heinz created a Halloween edition of their ketchup bottle, calling it “Tomato Blood,” which includes “57 blood types!” Every year loads of people are probably using ketchup instead of the expensive fake blood from Spirit Halloween, and this year, Heinz saw it coming. On their website, you can even buy a tomato blood costume kit that contains a 20 oz. bottle of ketchup and a makeup pallet, rhinestones, temporary tattoos, vampire fangs and spooky eyelashes.

Besides the costume kit, their Halloween-y website even sells plain costumes on which you can splatter your tomato blood! They’ve really thought of everything. The only thing I don’t like is their #HeinzHalloween Tip of wearing a sheet and dressing up as a bloody ghost. If ghosts are dead, they don’t have blood. Blood is red from oxygen, and dead people and ghosts would not be gushing that classic blood red. That’s me being overly particular, though… I think the whole concept is brilliant!

Did your company do anything special for Halloween? Let us know in the comments!